Surging sales of bicycles during lockdown have cushioned the trading blow from coronavirus for retailer Halfords.

It said bike sales had risen 57.1% in the 13 weeks to 3 July as people sought to avoid public transport.

As a retailer selling goods considered essential, Halfords did not have to cease trading because of coronavirus.

Halfords’ share price initially fell as much as 9.5% on Tuesday before recovering some of its losses. 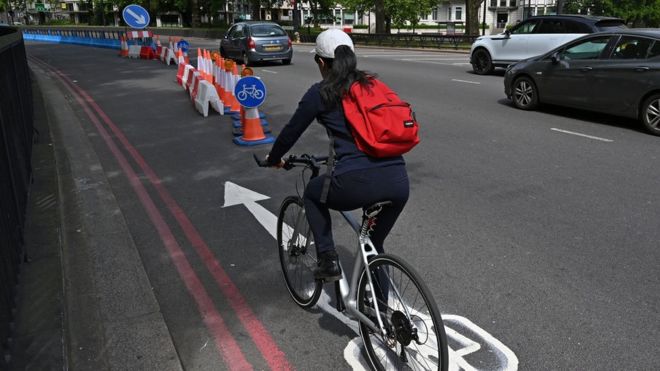 The retailer hailed the rise in like-for-like sales of bicycles, but said that at the same time, sales in its more profitable motoring division had fallen 45.4% as the number of car journeys declined sharply.

However, Halfords said it saw “improving trends” as the lockdown continued to ease.

“Having responded quickly and decisively to cater for the surge in popularity of cycling during lockdown, we are now seeing increased demand for motoring services and products as people start using their cars regularly again, having not done so for the last few months,” said chief executive Graham Stapleton.

Halfords said its performance in the first three months of the current financial year was “relatively strong” and “better than anticipated”, but the uncertainty over coronavirus meant it had withdrawn guidance for the full year.

However, the company outlined three potential scenarios for this year. In the worst-case scenario sales fall by 9.5% while in the most optimistic forecast sales decline by 5%.

It also noted that its sales would remain biased towards cycling and away from motoring in the short-term, and noted that this could hit profits as the cycling business has lower profit margins.

“Halfords has proved resilient during the coronavirus crisis, unlike many non-food retailers,” said Amy Higginbotham, retail analyst at GlobalData.

“But the retailer expects sales for its current financial year to decline 9.5% and profit before tax to be in the region of -£10m-£0m, in a worst-case scenario,” she added, attributing the share price fall to this prediction.

Stock markets around the world suffered historic losses in the first three...

Retail sales fell for the fifth month in a row in September,...