The vast majority of emissions cuts from electric cars will be wiped out by new road-building, a report says.

The government says vehicle emissions per mile will fall as zero-emissions cars take over Britain’s roads. 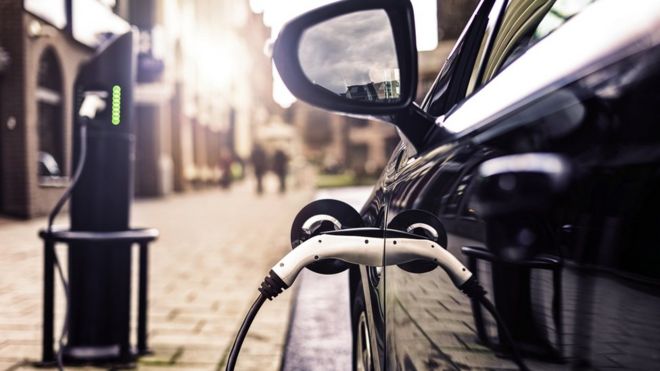 But the report says the 80% of the CO2 savings from clean cars will be negated by the £27bn planned roads programme.

It adds that if ministers want a “green recovery” the cash would be better spent on public transport, walking, cycling, and remote-working hubs.

And they point out that the electric cars will continue to increase local air pollution through particles eroding from brakes and tyres.

The calculations have been made by an environmental consultancy, Transport for Quality of Life, using data collected by Highways England.

Get Britain building, says Sunak on infrastructure
Electric car emissions myth ‘busted’
The paper estimates that a third of the predicted increase in emissions would come from construction – including energy for making steel, concrete and asphalt.

A third would be created by increased vehicle speeds on faster roads.

And a further third would be caused by extra traffic generated by new roads stimulating more car-dependent housing, retail parks and business parks.

The report says even with the government’s most optimistic estimate of the adoption rate for electric vehicles, emissions from trunk roads and motorways in England are not on track to meet “net zero“ by 2050.

A government spokesperson told BBC News the report is based on old data.

“This assessment is wholly incorrect and doesn’t take into account the benefits from the massive surge in electric vehicles,” he said.