There is little evidence of coronavirus being transmitted in schools, Education Secretary Gavin Williamson has said.

Mr Williamson said the government was being guided by the best science as it accelerated plans to reopen schools to all pupils in England next month.

Government advisers have warned the nation may have reached the limit of what can be reopened in society safely.

But Mr Williamson suggested an upcoming study would support the government’s position on reopening schools.

His comments came after Prime Minister Boris Johnson said the reopening of schools, after months without in-person education, was the “national priority” of the government. 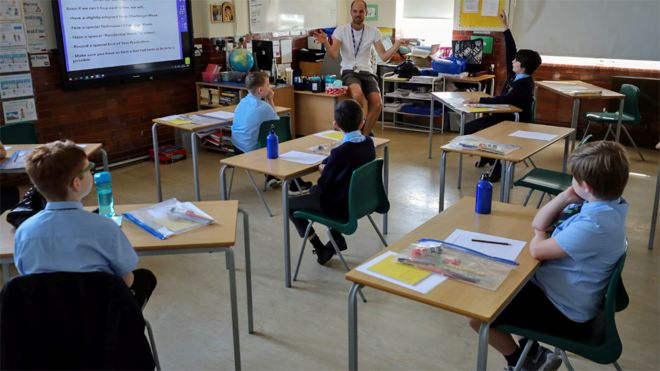 The prime minister, who is expected to visit a school later, is understood to have made it clear that schools should shut last in any future local lockdowns, after businesses including shops and pubs.

‘Growing confidence’
The Association of School and College Leaders has said there is an absence of clear guidance from the government, and schools are making their own contingency plans.

But the education secretary maintained that there was “growing confidence among parents about their children returning” to the classroom.

In a statement issued on Sunday evening, he said: “This is down to the hard work of school staff across the country who are putting in place a range of protective measures to prepare to welcome back all pupils at the start of term.”

Mr Williamson also referred to the “latest research, which is expected to be published later this year – one of the largest studies on the coronavirus in schools in the world”, saying it “makes it clear there is little evidence that the virus is transmitted at school”.

He is believed to be referring to a forthcoming report to be released by Public Health England.

Up to 99% of Covid-19 hospitalisations and deaths could be avoided with...