The UK economy grew by 6.6% in July, according to official figures, but remains far below pre-pandemic levels.

It is the third month in a row that the economy has expanded.

But the Office for National Statistics (ONS) said that the UK “has still only recovered just over half of the lost output caused by the coronavirus”.

Hairdressers, pubs and restaurants contributed to growth after companies were allowed to reopen in July. 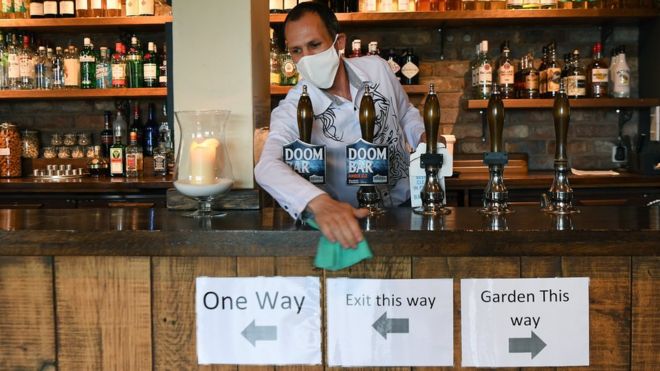 Is the UK economy back to pre-coronavirus levels?

Definitely not. The UK’s economy – which is measured by the value and the volume of goods and services it produces – is still 11.7% smaller than it was in February, before lockdown was imposed.

Growth in July was also slower than the 8.7% expansion seen in June.

There are encouraging signs, however. Thomas Pugh, UK economist at Capital Economics, said the reopening of restaurants and pubs meant the accommodation and food services sector “rose by a whopping 140.8%” between June and July.

This had a knock-on effect for the alcohol industry which grew by 32.7%.

Keeping youngsters occupied while at home also continued to boost demand for toys and games, said the ONS, while holidaying in the UK supported campsites, cottages and caravan parks “because of a large increase in staycations”.

However, activity in the accommodation and food services sector was still 60.1% below the level recorded in February.

And while Mr Pugh expects the Eat Out to Help Out scheme to provide a further boost in August, “now that most sectors in the economy are open again there is little scope for further large rises in monthly GDP”.

“Car sales exceeded pre-crisis levels for the first time with showrooms having a particularly busy time,” said Darren Morgan, director of economic statistics at the ONS.

Amazon builds its own testing lab for staff

Retail giant Amazon says it will build its own coronavirus testing lab...

BELOW, IS JUST SOME OF THE AREAS WE CAN HELP WITH; Employee...