Kingfisher to hand back £23m of UK furlough cash

Kingfisher to hand back £23m of UK furlough cash

B&Q owner Kingfisher is to hand back £23m in UK furlough cash after a do-it-yourself boom due to coronavirus.

Second-quarter home improvement sales rose as more people worked from home and looked at fresh ways to use space during the pandemic, Kingfisher said.

People in England have been told to work from home if possible after a period of more relaxed restrictions. 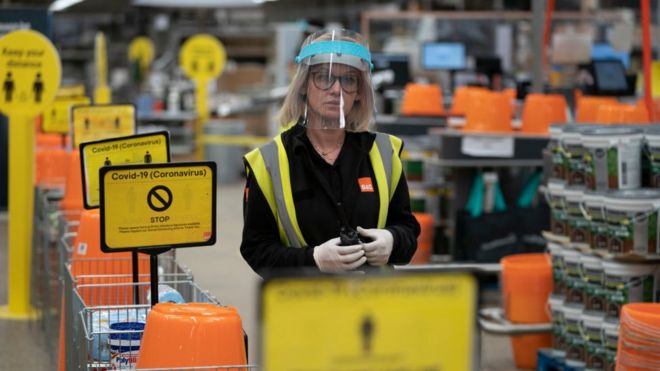 UK firms have voluntarily returned more than £215m to the government in furlough scheme payments.

The coronavirus crisis has badly hit many parts of the economy, but some firms are seeing benefits.

Pre-tax profits for the company as a whole jumped more than 62% to £98m in the half year, after a strong second quarter.

“The crisis has prompted more people to rediscover their homes and find pleasure in making them better,” said Kingfisher chief executive Thierry Garnier. “It is creating new home improvement needs, as people seek new ways to use space or adjust to working from home.”

The crisis also boosted shopping online. Kingfisher’s e-commerce sales rose 164% in the first half of the year and now represent 19% of total sales, up from 7% in the same period last year.

After Covid-19 hit Kingfisher sales in the first quarter, second-quarter sales made a strong recovery, the company said.

The group owns B&Q and Screwfix in Britain and Castorama and Brico Depot in France and other markets.

It said half of its staff were on job retention schemes in the UK, France, Spain and Romania in April, but that had dropped to about 10% by the end of May as Kingfisher reopened stores.

Apart from staff who were vulnerable, all employees had returned to work by 1 July, Kingfisher said.

Over the six months to 31 July, the group claimed £55m in state aid in its different markets, including the £23m it intends to repay in the UK.

However, a spokesman for the group said the situation in France was “very different” and that profit had been hit by an extended period of lockdown.

UK firms have voluntarily returned millions of pounds to the government in furlough scheme payments they did not need or took in error.

More than 80,400 employers have returned cash they were given to help cover workers’ salaries, according to HMRC figures.

But the money that has been returned is a tiny part of the £35.4bn claimed under the scheme up until 16 August.

Officials believe £3.5bn may have been paid out in error or to fraudsters.

Under the Coronavirus Job Retention Scheme (CJRS) – or furlough scheme – workers placed on leave have received 80% of their pay, up to a maximum of £2,500 a month.

At first, this was all paid for by the government, but firms are now having to make a contribution to wages as well.

The price of a barrel of Brent Crude - the UK benchmark...

Young drivers 'let down over insurance app faults' Young people are being threatened...

A couple who were "gutted" to have their dream Cornwall wedding cancelled...