Government borrowing fell in September compared with a year earlier as the economy continued to recover from coronavirus lockdowns.

Borrowing – the difference between spending and tax income – stood at £21.8bn, which was £7bn less than in September 2020.

But the figure was still the second-highest for September since monthly records began in 1993.

The government spent billions of pounds on emergency measures to protect wages, such as the furlough scheme, which wrapped up last month.

Monthly borrowing chart
As a result, government debt has been pushed up to more than £2.2 trillion at the end of September this year – about 95.5% of the UK’s gross domestic product (GDP), and the highest level recorded since the early 1960s.

The Office for National Statistics (ONS) estimates that the government has borrowed a total of £108.1bn so far in the current financial year (April to September), although this is £101.2bn less than in the same period last year.

As well as higher spending on Covid measures, the government has collected less in tax receipts during the pandemic, having given some badly-affected firms tax holidays from VAT, for example.

As a result of a lower income from taxes and higher spending, the ONS now estimates that in the 2020-21 financial year the government borrowed £319.9bn. That amounted to 14.9% of GDP, the highest rate seen since the end of World War Two. 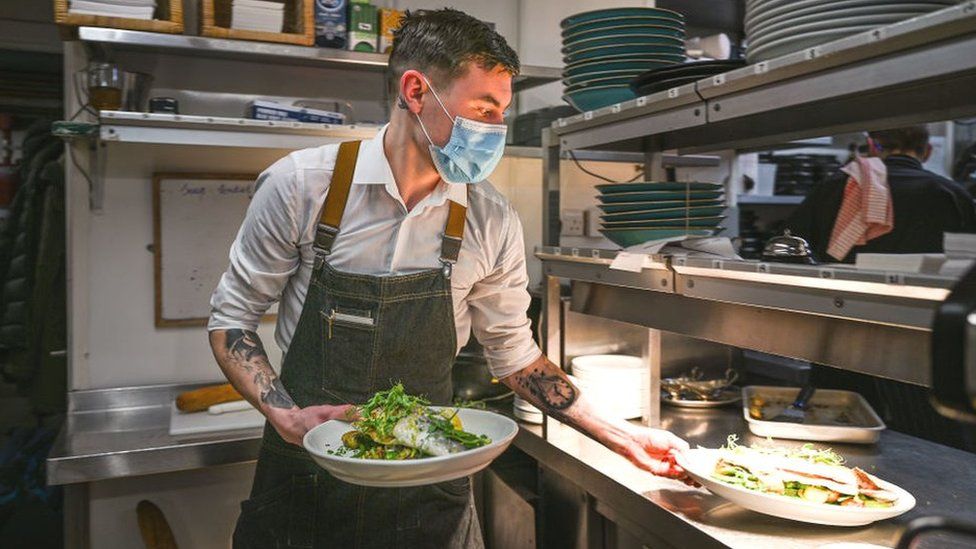 Some government sources of income have started to recover more recently. In September, the amount it collected through Value Added Tax (VAT) rose by 4.5% in comparison with the same month a year earlier.

Fuel duty payments were also up by 6%, although alcohol and tobacco tax takes fell by 12.7% and 7% respectively.

‘No giveaways’
Chancellor Rishi Sunak is due to deliver a new Budget and growth forecasts on 27 October, as well as new multi-year spending limits for individual government departments.

The monthly borrowing figure for September was lower than economists had expected. However, Paul Dales, chief UK economist at Capital Economics, said that while the picture had improved for the government ahead of next week’s Budget, he did not expect a “major fiscal giveaway”.

“Borrowing has fallen much more quickly than almost everyone expected,” he said.

“That said, the rumours are that the chancellor will still keep a very tight grip on the public finances in next Wednesday’s Budget to try and bring down borrowing even quicker and build a fiscal war chest to deploy ahead of the 2024 election.”

In response to the latest official figures, the chancellor said that although debt levels have risen, “our recovery is well underway – with more employees on payrolls than ever before and the fastest forecast growth in the G7 this year”.

“At the Budget and Spending Review next week, I will set out how we will continue to support public services, businesses and jobs while keeping our public finances fit for the future.”