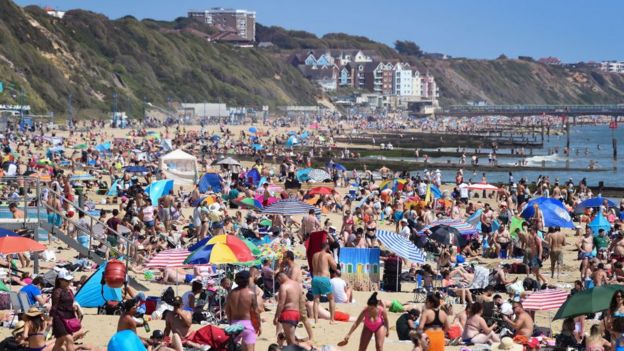 And it is even more extraordinary following a drenching winter, with record rain in February.

Meteorologists say they are amazed at the sudden switch from extreme wet to extreme dry – it is not “British” weather.

On average the UK gets 436 hours of sunshine between March and the end of May.

Scientists say the recent weather in the UK has been unprecedented and astounding.

This year we’ve bathed in an extraordinary 626 hours – smashing the previous record by a “staggering” amount, one Met Office worker said.

It is because the jet stream has locked the fine weather in place, just as it locked the previous winter rainfall in place.

“It’s unprecedented to see such a swing from one extreme to the other in such a short space of time. That’s what concerns me. We don’t see these things normally happening with our seasons.

“It’s part of a pattern where we’re experiencing increasingly extreme weather as the climate changes.”

“The sunshine statistics are really astounding.

“The stand out is by how much sunshine has broken the previous record – set in 1948. There’s been more sunshine than most of our past summer seasons. It’s quite remarkable.”

One of his colleagues described the figures as “absolutely staggering”.

Go Outdoors' owners are set to call in administrators as the coronavirus...

Trading Standards officers are seeking to halt sales of a device that...