UK government debt has risen above £2 trillion for the first time amid heavy spending to support the economy amid the coronavirus pandemic.

Spending on measures such as the furlough scheme means the debt figure now equals the value of everything the UK produces in a year.

Economists warned the situation would worsen before improving. 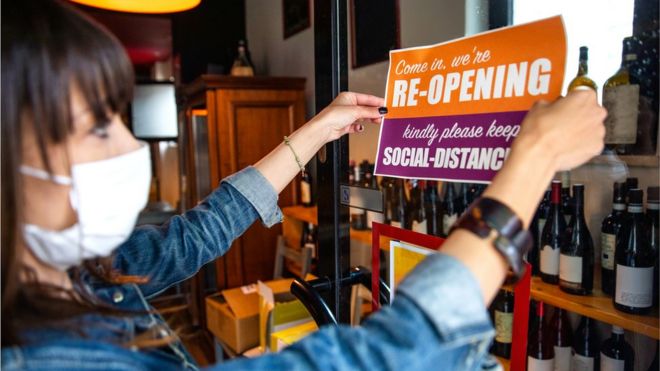 It is the first time debt has been above 100% of gross domestic product (GDP) since the 1960-61 financial year, the ONS said.

The July borrowing figure – the difference between spending and tax income – was £26.7bn, down from a revised £29.5bn in June.

It was the fourth highest borrowing in any month since records began in 1993. The three higher figures were the previous three months.

Those are big figures. What do they mean?
Ruth Gregory, senior UK economist at Capital Economics, said July’s borrowing figure was “another huge sum and pushes borrowing in the year to date to £150.5bn”.

“That is close to the deficit for the whole of 2009-10 of £158.3bn, which was previously the largest cash deficit in history, reflecting the extraordinary fiscal support the government has put in place to see the economy through the crisis.”

Safe for the public to shop again

People should feel confident that it is safe to go shopping when...

Some parts of England will run out of water within the next...