British retail sales have continued to increase for the fourth consecutive month, boosted by spending on household goods and DIY, according to official figures.

The Office for National Statistics (ONS) said retail sales volumes rose by 0.8% between July and August.

Sales are now 4% higher than in February, when a pandemic was declared. 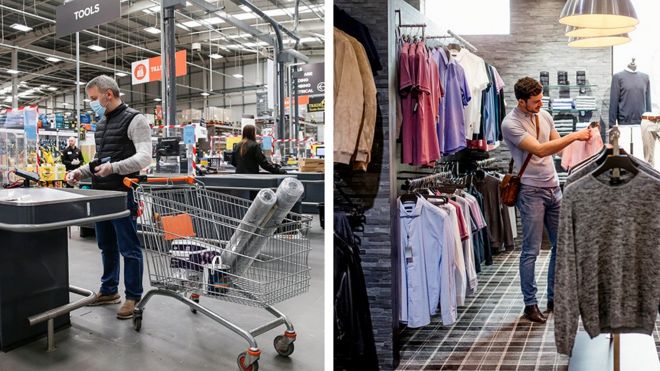 “Sales of household goods thrived as the demand for home improvement continued and, despite a dip this month, online sales remained high,” said Jonathan Athow, deputy national statistician for economic statistics at the ONS.

Spending on household goods was particularly strong in August, with retailers reporting a 9.9% jump in sales of homeware products compared with the pre-pandemic levels seen in February.

But August’s increase was smaller than the post-lockdown rebound seen in July, when retail sales volumes grew 3.6%.

Online sales also fell by 2.5% in August when compared with the previous month. But the strong growth in the number of customers shopping online during the pandemic has meant that sales were still 46.8% higher than in February.

Although online retailers might have seen higher numbers of clicks in recent months, many High Street stores are still struggling to attract customers after lockdown measures were eased nationally.

The volume of items sold in clothing shops, for example, still stood 15.9% below February’s pre-pandemic levels in August.

Helen Dickinson, chief executive of the British Retail Consortium, said: “The recovery remains a mixed bag, with high growth in online sales, while city centre shops suffered as a result of low footfall.”

She added: “With further lockdowns looming, the government must provide clarity on the impact it will have for shops.

“Retailers have invested hundreds of millions making stores safe and secure for customers during the pandemic; this includes perspex screens, social distancing measures and additional hygiene measures. As such, retail remains a safe space for consumers, even under local lockdowns.”

While August saw some consumers returning to city centres to take advantage of the government’s Eat Out to Help Out scheme, industry figures have suggested those areas might struggle to reach pre-pandemic levels of footfall.

Entrepreneur and ex-Dragons’ Den star Theo Paphitis told the BBC’s Today programme: “It’s really interesting as you see the confidence in the consumer in travelling outside their house. Our business outside the metropolitan areas… is remarkably stronger than it is within.

“It’s the fact that people lose the confidence to go far outside their normal area of habitat,” he said.

“It will never be the same again – I really can’t see our stores ever reaching the levels in metropolitan areas that they did before, because I think the genie’s out of the bottle.”

Several High Street chains also announced job cuts in August as they battled to shore up their businesses during the pandemic.

Sandwich chain Pret A Manger announced it would cut 3,000 jobs, or more than a third of its workforce, while department store chains Debenhams and M&S said they would be cutting 2,500 and 7,000 jobs.

Lisa Hooker, consumer markets leader at PwC, said that the run-up to Christmas would be crucial for retailers.

“Retailers will be hoping that the fragile recovery is not derailed by more widespread lockdowns, rising unemployment or dented consumer confidence,” she said.

Stock markets around the world suffered historic losses in the first three...