Nearly nine in 10 products sold on Black Friday are available for the same price or cheaper earlier in the year, according to consumer group Which?.

It urged consumers to “do some research” in order to spot genuine bargains during the 27 November sale.

Retailers including Amazon, Argos and John Lewis said they offered good deals all year round, not just during seasonal shopping events.

Many shoppers see Black Friday as a way to buy gifts cheaply before Christmas.

More than two-thirds have delayed a purchase to try to find a bargain in the sale, according to Lloyds Bank.

It expects Black Friday spending in the UK to soar to £750m this year. 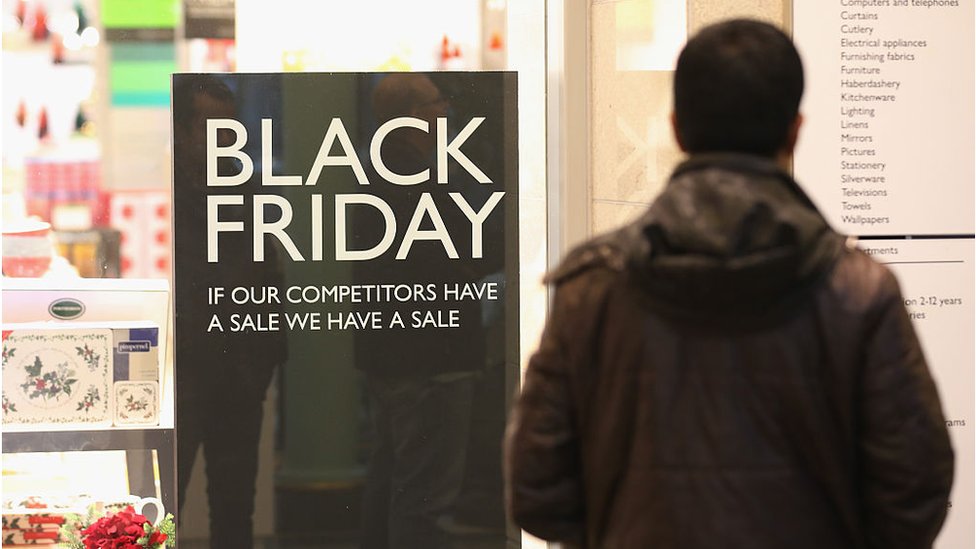 It looked at goods from Amazon, AO.com, Argos, Currys PC World and John Lewis and found only three items were at their cheapest on Black Friday.

Natalie Hitchins, head of home products and services at Which?, said: “Deals that look too good to be true often are, so don’t fall for time-limited offers and if you are looking for something in particular, do some research first.

“That way you’ll know a genuine bargain when you see one.”

‘Low prices all year round’
Currys PC World was the retailer most likely to have cheaper or similar pricing earlier in the year.

For example, a pair of Bose Quietcomfort headphones at the retailer was £249 on Black Friday but had been cheaper or the same price on at least 15 occasions in the previous six months.

At John Lewis, 70 of 78 products were found to have cost the same or less before the sale.

For example, a De’Longhi coffee machine cost £1,285 on Black Friday, but had cost the same or less on at least 35 occasions beforehand – falling to less than £1,200 on several days in May and June 2019.

Amazon came out top of the retailers Which? looked at, although over half (57%) of its products were available cheaper or for the same price in the six months before Black Friday.

Responding to the research, most retailers stressed that they price-matched throughout the year.

Amazon said: “We seek to offer our customers great value thanks to low prices all year round as well as a number of fantastic seasonal deals events.”
AO World said:”Last year’s Black Friday event had over 9,000 fantastic and fair offers for customers and we expect this year to be even bigger.”
Argos said: “Our Black Friday event gives customers access to hundreds of products at their lowest ever price. They may also be part of sales and promotions we run the following year.”
Currys PC World said it price-matched throughout the year and has additional sales “to ensure we keep our promise of amazing tech that is affordable and accessible”.
John Lewis said: “In addition to the variety of offers we have in-store and online during the promotional period, our never knowingly undersold price promise means that we continuously monitor and match the prices of our high street competitors throughout the year.”
Fraud warning
Shoppers are also being warned to watch out for Black Friday scams.

Barclays said consumers who fall victim to an online scam this week could lose an average of £735 each.

Electronics, trainers, phones and clothing are all popular products used to trick people.

Criminals set up fake websites and may offer goods that are bogus, shoddy, or never arrive.