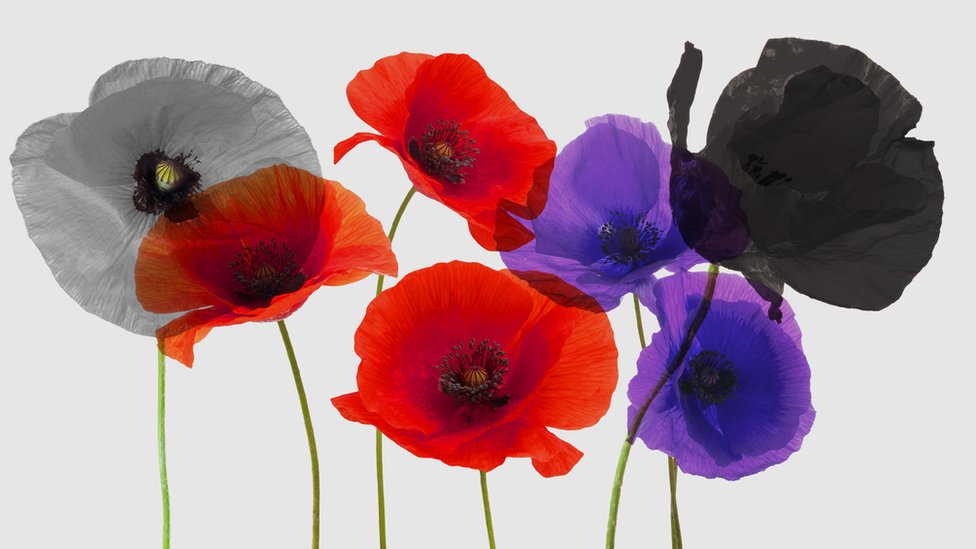 What does the red poppy mean?
The red poppy is a symbol of remembrance not just of those who died in the First World War, but in conflicts before and since.

The Poppy Appeal is run by the Royal British Legion charity, with thousands of volunteers selling the paper poppies on the streets and in shops every year.

The poppy’s origins as a symbol of remembrance lie in the First World War poem In Flanders Fields by Canadian officer John McCrae, first published in December 1915.

Its opening lines refer to how the flowers grew from the graves of soldiers across Western Europe during the conflict:

In Flanders fields the poppies blow
Between the crosses, row on row

As the war ended, American poet Moina Michael used In Flanders Fields as the inspiration for her own work, We Shall Keep the Faith, and began wearing and distributing the red poppy as a symbol of remembrance.

The practice quickly spread to the UK, where the first ever Poppy Day was held on 11 November, 1921, the third anniversary of Armistice Day.

It was adopted as a symbol by the newly-formed Royal British Legion, established to provide support for members and veterans of the British Armed Forces and their families.

The appeal has grown from manufacturing poppies in a room above a shop in Bermondsey, South London to a facility in Richmond where 50 ex-servicemen and women work all year round producing tens of millions of the symbolic flowers.

In 2014, the artwork Blood Swept Lands and Seas of Red was installed in the moat of the Tower of London to commemorate the centenary of the outbreak of the First World War.

It consisted of 888,246 ceramic poppies, denoting each member of the British Armed Forces who lost their life during the conflict, with the final flower planted on 11 November.

Outside the UK, poppies are predominantly worn in Commonwealth nations such as Canada, Australia, New Zealand and South Africa, and are also used to a lesser extent in the US.

Whereas in England poppies have two petals and a green leaf, the Scottish versions produced by PoppyScotland have four petals and no leaf.

The Scottish charity, which merged with the Royal British Legion in 2011, explains on its website: “Apart from being botanically incorrect it would cost £15,000 to make leaves for all poppies – money we feel is better spent on veterans.

“We might be slightly biased but we think the Scottish poppy looks nicer too.”

What does the white poppy mean?
The white poppy is a pacifist symbol of remembrance which has become more popular in recent years.

According to the Peace Pledge Union (PPU), the pacifist body which distributes them today, white poppies represent three things: remembrance for all victims of war, commitment to peace and a challenge to the glamorisation of conflict.

They were first produced in 1933 by the Women’s Co-operative Guild to symbolise a message of “no more war”, and play a prominent role in the annual Alternative Remembrance Sunday Ceremony.

While the red poppy specifically represents remembrance associated with the British Armed Forces, the white poppy commemorates all victims of all wars – both military and civilians of all nationalities – seeking to bring to an end “the exclusion of civilians from mainstream Remembrance events”.

It aims to promote the idea that there are different ways to avoid conflict than through violent means, with the PPU stating: “The best way to represent the victims of war is to work to prevent war in the present and future.”

Rather than being associated with humans who have died while serving, the purple poppy is in remembrance of animals that lost their lives at war.

The charity started the appeal because it felt the animals that die at war – which tend to mostly be horses and dogs – are often forgotten.

Animal Aid sold purple poppies in 2015, when it decided to replace them with enamel purple paw badges, as the charity felt the symbol was being misinterpreted, and the animals were being regarded as heroes, rather than victims.

The following year the purple poppy was adopted by the Murphy’s Army charity.

The Royal British Legion does not endorse the purple poppy, but has no problem with it being worn.

“We see no conflict in wearing the red poppy next to the purple or white poppy. Many animal rights supporters also support our work. We do ask that the items are not offered alongside each other however as this would confuse the public,” it has said.

What does the black poppy mean?
The black poppy was launched in 2010 by Selena Carty. It is in remembrance of black, African, Caribbean and Pacific Islanders who lost their lives at war.

The Black Poppy Rose organisation, which sells the poppies, says it was “created to be a symbol that represents the contributions made by the African/black/Caribbean/Pacific Islands communities to various wars since the 16th century.”

It adds that it aims to highlight “largely untold historical legacies”.

The organisation says its aims are:

To empower, educate and elevate those who are missing key historical narratives that have assisted in the way the world has been shaped today
To assist with the preservation of African/black history so it is not left deep inside the archives
To share the history and information with the world so we continue to assist with the healing through our shared history and experiences